5 Steps Companies Can Take to Capitalise on Adversity

Sometime during the first week of March, Michael Schmidtmann got a call from a client whose customers had stopped paying their bills.

Schmidtmann, a peer group facilitator, business coach and sales consultant, was surprised by the news. He was aware that COVID-19 had worked its way to the U.S. Still, he wasn’t expecting this particular client — a tech company that generated significant revenue from monthly maintenance contracts — to be dramatically affected.

But the client also relied heavily on two verticals that were the first to get hammered: restaurants and hotels. In response to the downturn it was facing, the company instituted pay cuts, furloughed some employees, and the owner‘s family all caught the virus.

“This is when I realised this was a big deal,” Schmidtmann during a recent NetSuite Business Forward discussion about coping with adversity.

After that first tragic wave, Schmidtmann’s client somehow managed to turn the tables. It obtained an SBA Pay-check Protection Program loan, reversed the pay cuts, brought back furloughed workers, and took five specific actions that not only have helped it to survive but have turned 2020 into the company’s best year yet.

It’s a story that resonated with Schmidtmann, who sees no reason to wallow in the negative of the pandemic and instead advises clients to see the opportunities presented by the adversity they’re experiencing.

For context, Schmidtmann offered a few examples of how big-name companies turned adversity into success. There was FedEx, which early in its history, reached a point where it couldn’t pay for aeroplane fuel. Founder Fred Smith took the last $5,000 the company had to Las Vegas, turned it into $27,000 playing blackjack, and never looked back.

For those who don’t consider gambling a legitimate strategic option, consider the tale of Intel, which back in the 1950s was a maker of both DRAM memory trips and microprocessors. Facing increasing competition from Asian manufacturers, Intel’s management decided to consider what a new team would do if they were ousted. The conclusion? New leadership would get rid of the memory business and focus on microprocessors. So that’s exactly what Intel did, and the decision led to a historic, decades-long run of meteoric revenue growth.

But Schmidtmann’s favourite story is that of Southwest Airlines, which started with four planes flying between Dallas, Houston and San Antonio. When the country spiralled into a recession in 1973, the airline suddenly was unable to make all four of its lease payments.

Realising that cutting service would probably mean the eventual end of the airline, Southwest came up with the idea of ditching assigned seating and business class. Doing so enabled the airline to shorten turnaround times enough to serve the same number of flights with fewer planes, and sticking with that approach over time turned it into the most profitable U.S. airline.

The Value of Constraints

Schmidtmann also equated the adversity companies are facing in this pandemic-stricken world to a form of constraint, noting a number of examples of successful business constraints: Twitter’s original 140-character limit, the NBA’s 24-second shot clock and the pricing model of the dollar stores.

Even the wildly successful children’s book The Cat in the Hat was only made possible by the publisher insisting that Dr. Seuss limit the vocabulary to 225 words (he ended up using 236, but then used only 50 in Green Eggs & Ham).

“The constraint of this crisis can help focus you and direct you toward the things that make sense,” said Schmidtmann. “It can narrow your alternatives.”

He pointed out that Apple, Oracle, Dell, Google, YouTube, Facebook, AirBnB and Uber all launched during recessions, and each of those companies’ founders credit the recessions for their success.

Schmidtmann said that already certain industries and companies have been able to capitalise on the opportunities presented by the pandemic. For example, home improvement and hardware stores have been hot spots, alcohol sales are way up, and the legal cannabis industry is booming, too.

And what about Zoom? The service, which hosted 10 million conference calls each day in 2019 is now hosting 30 times that, and now has a market capitalisation greater than all of the U.S. airlines combined.

Five Actions to Capitalise on Adversity

Which brings us back to the client that convinced Schmidtmann that the pandemic was a big deal. While the five actions the company took may not match the steps taken by Intel, Southwest or Zoom, Schmidtmann believes they represent a blueprint for making the most of the pandemic, and thus he recommends companies consider exploring them.

Here are the five actions the client took, with tips from Schmidtmann on how to approach them:

Schmidtmann suggested that companies ask themselves what they can do to become indispensable to their customers at this time. That could be helping to reduce costs, empowering remote workers, or being of service in a variety of other ways.

Schmidtmann recommends offering services that match up well with a pandemic. For instance, his client, which offers IT security services, started offering services to protect home offices from cyber threats. The company also created a quarantine survival kit to distribute to clients, which became a great conversation-starter.

Schmidtmann’s client decided to turn the pandemic into a training opportunity, encouraging and supporting technical employees in getting certifications updated. It also took a close look at how it managed sales and customer acquisition and ended up creating a seven-step sales process.

The question Schmidtmann tells clients to ask themselves here is, “how do we make ourselves seem different?” He noted the example of Red Hat, which specialised in selling open-source Linux software, which is free, yet ended up being acquired by IBM for $34 billion because of how it packaged and configured the software. He suggested developing separate strategies for dealing with smaller and larger competitors.

The pandemic has all but killed face-to-face meetings, and no one — including Schmidtmann — is predicting that will end any time soon. With that in mind, it’s important that companies turn their use of virtual tools (such as Zoom) into an advantage. That might mean having salespeople establish mini TV studios in their homes so they can present compelling stories with a professional appearance.

“If you’re going to sell remotely,” said Schmidtmann, “why not be the best at selling remotely?”

The End (of the Pandemic) Will Come

Now, while these five actions are designed to help a company survive an extended pandemic, Schmidtmann also is a realist, and along those lines, he shared a story of how Mark Twain was heading out to dinner with a colleague in San Francisco during a rainstorm. As the downpour ravaged their umbrellas, Twain’s friend wondered if the storm would ever end, to which Twain responded, “it always has.”

That, said Schmidtmann, is also true of COVID-19. The American economy has survived previous pandemics, world wars, economic depressions and 9/11, and it will survive this. That said, simply holding on and waiting for it to end isn’t an option.

“If you take action,” Schmidtmann said, “you’ll be better than ever.”

This article was originally published on the Oracle NetSuite Blog.

Download your free guide to learn more about weathering the storm of the Coronavirus pandemic. 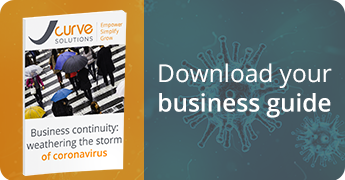